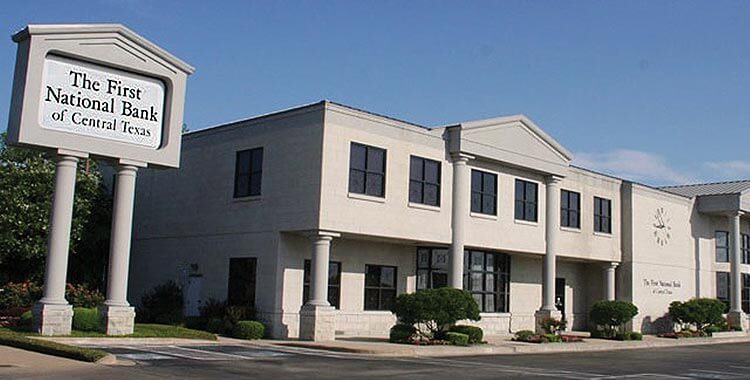 The First National Bank of Central Texas is proud to announce several promotions among its employees. These promotions are well-deserved, said President and CEO Randy Crawford.

We have an outstanding team here at First National,” said Crawford. “And it is exciting to reward our team members for their hard work and dedication to our customers.”

The bank’s Board of Directors approved the following promotions:

Mackie has been with the bank since 1996. The Fairfield native heads up the Bank’s retail lending department.

Jan oversees the lending assistants at the Waco Banking Center. The Robinson native has been with the bank since 1996.

Rhonda has been with First National since 1996. She manages our China Spring Banking Center and heads up the Human Resources department.

Brian has been with the bank since 1997. The former Baylor football standout manages our Mart Banking Center.

Chris is a seasoned commercial loan officer who joined the bank in 2008. The McGregor High School and Texas A&M graduate at one time managed First National’s credit department.

Barbara oversees the lending assistants at our Woodway-Hewitt Banking Center. The Robinson native has been with First National since 2006.

Evan is in charge of Asset Liability, Funds Management, Investments, Regulatory Reporting and Budgeting. He also manages a loan portfolio. The Waco native and Baylor graduate has been with the Bank since 2009.

Jeff has been with the Bank since 2007 and is in charge of the Teller Functions at the Waco and Woodway-Hewitt Banking Centers. Jeff also is the Bank’s Security Officer, oversees our ATM network, and assists with the Bank’s BSA function.

Russell is a talented commercial loan officer who joined the Bank in 2013. Russell was born and raised in Waco. He graduated from Waco High and Texas Christian University.

Donna has supervisory responsibility for the Bank’s customer service department which includes Bookkeeping, Debit Card Operations, Wire Transfers and On Line Banking. Donna has been with the Bank since 2003.

Taylor joined the Bank in 2013 and since then has managed the Credit Department of the Bank. Taylor is a Robinson High School and Tarleton State University graduate.

Brian joined the Bank in 2007 working in the IT Department. Brian is a graduate of Texas State Technical College and oversees the IT department.

Ryan joined the Bank in 2014 and since that time has worked in the Credit Department. In January 2018 Ryan will be responsible for the lending function at the China Spring Banking Center. Ryan is a graduate of Clifton High School and the University of Mary Hardin-Baylor.