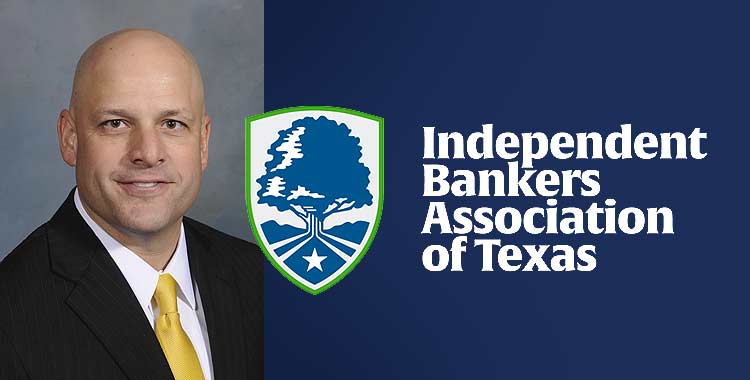 AUSTIN, Texas — The Independent Bankers Association of Texas (IBAT) is proud to announce that Sloan Kuehl, president and chief lending officer of Waco-based First National Bank of Central Texas, has been elected to serve on the IBAT board of directors for a three-year term. He officially accepted this position during the association’s 47th annual convention held September 18-21 in Austin.

With nearly 30 years in the banking industry, Kuehl has served at First National Bank of Central Texas for the past 25 years. He started in the mail room and worked his way up through the credit department and then became a lender before being named to his current role as president and chief lending officer.

Kuehl earned his BBA degree in finance and economics from the University of Mary Hardin Baylor in Belton, Texas. He also graduated from the Texas Tech University Graduate School of Banking.

Active in his community, Kuehl serves as vice chairman of the Providence Foundation, as well as chairman of the foundation’s grant review committee, and vice president of the H&H Water Supply Corp. He previously served as treasurer on the board of the Heart O’ Texas (HOT) Fair & Rodeo, for which he was also a timed-event superintendent, vice chairman of the Education Service Center’s Region 12 Technology Foundation and on the board of the Greater Waco Chamber of Commerce. Kuehl and his partner, Rachel Wilde, enjoy being outdoors, hiking, traveling, tending to cattle on their ranch, riding horses and playing golf.

About the Independent Bankers Association of Texas

Formed in 1974, the Independent Bankers Association of Texas (IBAT) represents Texas community banks. The Austin-based group is the largest state community banking organization in the nation, with membership comprised of more than 4,600 banks and branches in 700 Texas communities. Providing safe and responsible financial services to all Texans, IBAT member bank assets range in size from $26 million to $44 billion with combined assets statewide of nearly $193 billion. IBAT member banks are committed to supporting and investing in their local communities.